K A R A T E
Early reference to the term "Okinawa Kenpo"
dates back to the early 1900's. During this period the name was used as a
generic name for all Okinawan Karate. It was not until the early 1950's that
the use of the name shifted to describe a particular karate system taught by
Master SHIGERU NAKAMURA.

Master Shigeru Nakamura (1893-1969)
Master Nakamura was the founder of Okinawa Kenpo.
His first introduction to karate came at the Icchu Middle
School, in Shuri where Karate had just been introduced to the educational
system. His instructors included Kanryo Higashionna, Kentsu Yabu & Chomo
Hanashiro. Yastune Itosu also made periodic visits to the school. Upon
graduation from the middle school, Nakamura returned to Nago, where he
continued his training under Shinkichi Kunioshi, the successor to the legendary
Naha "Bushi" Sakiyama. In 1953 Nakamura established his own dojo in Nago City,
calling his form of the art "Okinawa Kenpo".

In 1955, the "Okinawa Kenpo Renmei" was formed by Masters Shigeru Nakamura
and Zenryo Shimabuku, with Master Nakamura as President. Master Nakamura
was known for his development of the "Bogu Gear" for contact sparring. 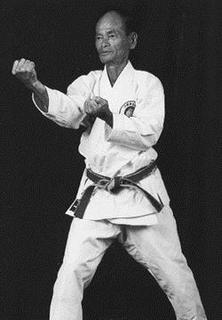 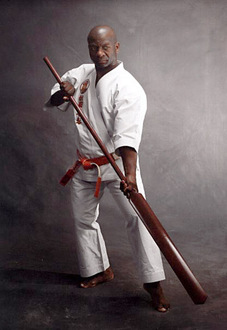 Hanshi Larry Isaac
Hanshi Larry Isaac, 10th Degree Blackbelt (Judan), has been training in Martial Arts
for well over half of his lifetime. Hanshi was a student of Master Odo and trained
in Okinawa Japan while he was stationed there in the Marine Corps. This is a brief history on
Hanshi Isaac's extensive Martial Arts career that has been time tested.

For almost five decades, Hanshi Isaac's expertise, experience, and
positive teaching and training methods have literally dominated the Martial Arts
tournament circuit, both regionally and nationally. Hanshi Isaac is the first and
only Martial Artist/Instructor from the Carolina's to be National Triple Crown winner.
In fact, he is six-time National Champion who has been rated in all the major Karate
circuits.

Nationally, Hanshi Isaac has been ranked No.1 in Kata (forms), ranked No.1 in weapons,
and ranked No.2 in fighting in the Senior Divisions. In 1990 and 1991 he was inducted into
the Professional Karate League's (PKL) Hall of Fame. In 1989, after winning the
National Karate Championships in Edison, N.J., Hanshi Isaac was inducted into
the IAMA organization by Master Gary Alexander (10th degree black belt). He has Dojo's located in North Carolina.
© 2012 - 2023 | Smith Family Dojo | All Rights Reserved